I just got Megan and Frank packed up and off to the first of three soccer games this extremely hot weekend.  Madi and I will miss the first game in order to make it to her guitar lesson.  We will join the other two for game two.  If you were to look at the weather you would think we were in mid-August instead of late spring.  We are in the middle of the first heat wave of the year with today being the fourth day over 90 degrees.  Thankfully Meg has a few hours in between games and will be able to come home and relax in the cool air-conditioned house for a little bit.  I think I definitely see pool time later today! 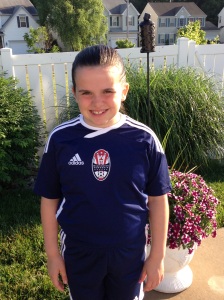 Megan’s soccer season was actually over.  The township has two teams for her age group.  We received an e-mail asking if she would jump to the other team for the weekend to help out.  That request came before I realized it was going to be so hot this weekend :-).  The experience will be good for her to play with different girls.  She and one other girls from her team will both be playing.  They had one practice together the other night.  Fingers are crossed for a fun tournament!