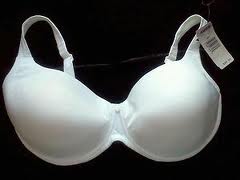 So when I was at the doctors the other day he reaffirmed that I am under no circumstances to wear a bra until at least the next time I see him in 3 weeks.  No Bra…last time I can say that I could get away with walking around town (not that I am going anywhere right now), without being ticketed or poking myself in the eye was like maybe when I was 12?

Heading into the surgery I was a 40DD.   I had thought about reduction for a while but once this process started it was like “all in”.  We agreed that we would be going smaller but he could not guarantee a size per say and that we would need to “tweak” the initial work which would be done at the time of the nipple reconstruction.

So the no bra thing is really is not a problem at all for a few reasons, first they are still so swollen they are like annoying (yet non moving) bricks on my chest.  Second, I am not going anywhere fast right now, and third they are well, not at all “boob” shaped.  They are clearly different sizes and I swear they point in different directions. They strike me as more square.  I will need another small procedure probably in about 4-5 weeks back in the main hospital OR.  my Surgeon say it will be about a 2 hour process where he will hide the flap, build new nips and liposuction the new  boobs. The plan is that since I was so large anyway, to utilize the extra skin that would have been cut away in surgery.  Instead of having to harvest skin for the new nips, he will gather what is forming around the new flaps as the swelling goes down and make the nip out of it , at the same time hiding the flap and  creating a nice “boob” shape.   The doctor says they will be lovely when finished and not to worry.  Honestly, I am not at all worried.  I fully trust in my plastic surgeon and the “boobie vision” he has painted for me.  For now I have been hanging out in a tank top which I pin the last drain to but then put a baggy button down over top.  It works.

Anyway, yesterday was a down day.  I really spent the day just lying around and napping.  Frank took the girls out for a few hours in the afternoon which was great.  I had no real energy or inclination to do anything more than hang out in my size smaller bike shorts. Sleeping is improving (still with assistance).  Almost made it through the night.  Closest I have come anyway!