Change is in the air!  Really!  All day they sky has been a crazy shade of grey while the winds have begun to increase.  This evening a crazy pink and yellow. It seems early in the season but a good size Nor’easter is steaming its way toward our fine state. Heavy rains and wind will lead to flooding and damage and to some even worse, indoor recess for the school kids.

Alright, to be clear, of course indoor recess is not worse than flooding or damage. As a parent I never really gave much thought to recess at all.  It was such a tiny part of the school day.  Now that I am in a school I have a new-found respect for the few minutes a day when the children are allowed to run care free blowing off the steam of the morning’s learning exercises.  Just a few minutes is all that is needed but on a day when the weather does not cooperate, a distinct difference is noticeable.

Looks like the rain and wind will hang on for a few days and we all know what that means….bad hair for everyone!  Hey, it could always be worse, it could be a blizzard :-).

One week after Superstorm Sandy, we are in the midst of another (much smaller) nor’easter.  For my area it brings an early snow.  The roads are still too warm for it to lay but it is enough to cause stupidity.  I was driving to my radiology appointment earlier and was the third car in line at a red light.  All three of us were waiting to turn left.  The light changed, the first car started through the intersection just to be broadsided by some young girl who either was not looking, on a phone, a terrible driver or caught up in the “sky is falling” early snow syndrome that hits so many in my area the first few times the white stuff shows itself.

So once I was able to continue on my way, I made it to my much-anticipated pelvic ultrasound.  I quickly downed my 32 ozs of water int he parking lot and headed in. The tech was a very nice young woman who was very chatty.  I guess many woman come in nervous.  After years of biopsies, two child births, a miscarriage and the mastectomy this was just a few minutes of inconvenient time for me.  I was pleased that the appointment was timely and really pretty quick.  Can’t ask for much more than that I suppose!

I did think of how funny it would be if my husband or any man for that matter were to have to switch places with me (or any woman) undergoing these procedures.  Don’t get me wrong, Frank has been wonderful with me during this entire process, but I could not imagine what he would be like if we had to switch places.  I mean the common cold is earth shattering.

Tomorrow I start my Prep for Friday’s colonoscopy . Today my instructions were to stay away from fruits and veggies, nothing was said about the girls bowl of halloween candy :-)!  I find it somewhat amusing the it is called Moviprep.  On a quick glance you may think that some great film may start playing as you mix up the fine concoction.  At closer glance it stirs images of other types of moving.

I think in my mind I will hang onto the first! 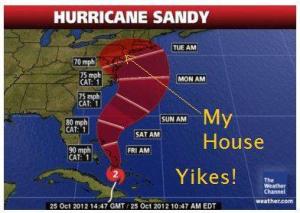 I pulled this image from Facebook today and after the chuckle it gave me realized it probably was time to start to batten down the hatches.  Once the normal running of Saturday was over we secured the patio furniture and loose items from the backyard.  Not really sure what to expect, many people hear that the hurricane is only a cat1 and weak but for where we are hearing that it is an extreme “Nor’easter ”  can strike much more fear than most recent hurricanes.  They tend to hang around for hours even days and carry tons of water.

Only time will tell.  The Governor has issued mandatory evacuations for the coastal areas by 4pm tomorrow which means my sister and her dog will be moving in by the evening.  We can talk about her later since she does not read this anyway :-)! As for what happens after that, well guess we will all stay tuned.