I have been very sore today!

In some respects I feel like it was a lifetime ago that I had my surgery but then when I look at a calendar it has still not even been 3 months.  Less than a month since the nipple reconstruction and revision which in itself was a pretty large surgery.  Today my body waved a white flag. I could not even bring myself to put on a bra today.  I tried to ignore it this morning and ran some errands and then took a walk but half way through my walk I could tell things were off.  I headed home and ever since have been on my butt.

Oh well, tomorrow is another day!

I do not think that there is any other quality so essential to success of any kind as the quality of perseverance. It overcomes almost everything, even nature.

Been a little since I did a surgery followup.  The actual bilateral prophylactic mastectomy was On July 2, followed by the nipple reconstruction and revision on August 24.

The reconstruction was completed at the same time via a DIEP flap procedure.  After many weeks of initial struggles with core strength, I am fully able to move as I wish.  I am at the point now where I do sit up crunches every night.  At first only 10 or so now 100+ .  I also either walk or spend some time on the elliptical machine a few days a week. I still have tightness in the abdomen but it is a good tight. I am stunned at the change of size in my abdomen.  I am not on the scale of Barbie but it is by far the flattest stomach I have seen in many years.

I do still have discomfort in the breasts.  The breast revision was much large than initially expected.  Due to the size of the incisions and amount of surgery performed, I still have a hard time wearing a bra.  I feel that I need to wear one if I am going out in public, ie back to school nights, shopping, soccer etc because of the nipple issue.  As I had stated in an earlier post, the surgeon had to make the nipples large to allow for shrinkage.  One of them has and is about right.  The other has not and still reminds me of a strange little thumb like appendage. He has assured me that if needed this can be corrected very easily.  They are also a bit out of line which I am also told is a an easy fix.  So it does look like we have a small procedure ahead.  I see him again mid october.

I do look forward to a day when I have no discomfort but have accepted the fact that the day is not around the corner.

I am thrilled that my life for the most part is getting back to normal, but one highlight of my day does still remain the bra removal.

I have lost close to 40 pounds since my max weight 1 year prior to surgery.

**(post pathology with the finds of cancer markers, the risk would have increased but no one ever put it into number for me)

I have been communicating via this blog for roughly 5 months or so.  I started as an outlet for my feeling surrounding my upcoming Bilateral Prophylactic Mastectomy.  I found great comfort in the support of others who were in similar situations.  I hope I also provided some for others.

I continue to recover but for the most part the roughest parts are behind me.  I have completed the nipple reconstruction and revision and have been cleared for regular activity.  Although still sore, each day gets easier and more normal.  Today was a day of laundry and food shopping, can’t get much more normal than that! 🙂 I will see the doctor again in 6 weeks and may need 1 more small procedure but nothing to the scale of what I have been through the last few months.

SO, now what?  I enjoy the outlet the blog provides.  I named it Decisions for my Family but initially had a header of Boobs don’t make the Woman. A few weeks ago the blog went through a face lift and I dropped the “boobs” title.  I will continue to write the blog about things that affect the most important thing to me, my family.

This summer’s surgeries have changed me as a person and will be a constant foundation for many of my decisions.  In my situation, a reminder of how important actually making a tough decision is as well as  the impact of such decisions on everyone around me.

I have not fully decided what the future of the blog looks like and may not fully define the parameters.  Quite honestly there are no parameters it is truly a wide open topic.  From the upcoming election which I feel is the most important in my lifetime, to continued updates on the boobs.  There will of course be many words describing the most beautiful things in my life, my girls, my husband, my family. The future is thankfully, wide open! 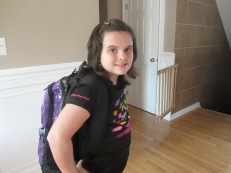