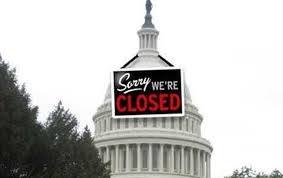 As a mother, I will never listen to my children as the argue with fingers pointed at each other screaming it was the others fault.  It always takes multiple sides for a disagreement to start.  Over the last many days we have been subjected to nothing more than that same finger pointing  by paid “news” sources and elected officials as they push this agenda or that.

What needs to be kept in mind…all of those in Washington were elected.  No one should be surprised by the actions playing out right now, especially by the House since those individuals ran for office saying they would do exactly what they are doing right now.  We as a people complain when Washington does “business as usual” yet when someone stands up to try to change things we hear that they are working outside of what is expected or how there is “infighting” in a party.  SO, what do we want?

Most people I know are able to look at the situation and place blame across the board, on all of our so-called “leaders” as it should be.  Blame on a weak President who will call the President of Iran but makes the statement he will not negotiate with the Republicans in Congress.  A weak Republican Speaker of the House who can not even keep his group on the same message or for that matter a consistent message for more than a few hour at a time.  A weak Democrat leader of the Senate who would rather give interviews and call others names rather than even try to negotiate.  All who have taken extreme stances and pointed their fingers at the others screaming it is their fault.

Many people make the statement that they want the politicians to “negotiate” but for many that is just not true.  For Democrats that means just allow for more money with no strings or questions attached and for Republicans it means squash Obamacare.

As for the Health care law, I do feel that everyone needs to flash back a bit and remember how it all started. There are parts of this law that all Americans have supported such as access to health care for those with pre-existing conditions, allowing children to stay on parents policies for a longer period of time and access for all children to basic healthcare.   Instead of our elected leaders sitting down and negotiating to pass pieces that would help the people, a huge law, admittedly not even read by many who voted on it was passed via the “nuclear option” and back room deals.  SInce then it has been a topic for elections everywhere.  To be surprised at what is happening now is just silly since those voting the way they are doing exactly what they said they would do when they to were elected.

SO what now?  Not sure if any of us have that answer.  As a country we are more divided that ever in my lifetime.  I can only hope that a true leader would rise above all of this craziness and name calling to lead us into the future.  I guess there is always hope but for the near future it looks like more of the same.  Good luck to all of us!