I hate that my entire life continues to revolve around surgery.  For the last several months, everything I do is either to make sure it is taken care of  before a surgery or the evaluation of whether I can do it because of the surgery.  With this pending procedure  much later than I would have liked, and the first day of school right around the corner, I can only pray that I will be up and around to attend meet the teacher and get the girls to the school bus.

I have no idea what to expect from the nipple reconstruction and revision in the way of pain.  Initially ,I would have said it was to be minor when it was just the nips but now that we are actually cutting to remove the “side air bags”, I assume the level of pain may be somewhat higher.  The thought of pain on so many levels is dreaded.  At this point I rarely even take Motrin or Tylenol.  The thought of narcotics again makes me shudder just a bit.  I am feeling so close to normal, the thoughts of going backward, starting over again, no wonder I continue to struggle to sleep.

I received a comment on my blog last night telling me to “rest a little before the next surgery”.  Funny, sometimes it takes someone on the outside to point that out..thank you!  My husband and I actually were able to sit for a few minutes this morning quietly before the girls woke up.  We will take tomorrow as a family day…activity to be named later.

I have included a picture that does not relate at all to the post today but the face just demands to be posted.  Madison lost a second tooth in just a handful of days.  Not sure how the poor kid can eat at this point.  It is one heck of a mug! 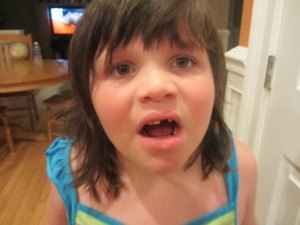